I imagine this is the most well known reason used for the bands breakup. Perhaps the earliest one used as well, at least publicly, by Alice and his backers.* Although debunked by three of the other band members, for many it is still believed to be the reason for the band’s demise, especially by the casual Alice Cooper fan.

At the time of the split, I am sure there had been talk of cutting back on elaborate stage theatrics, perhaps even before the Billion Dollar Baby tour. Of course, the question would be, how serious was this talk – and could of it been misinterpreted by Alice/Shep?

The ‘’theatrics’’ question sort of appears silly in retrospect since Michael, Neal, and Dennis created an elaborated stage show for their brief B$B tour for their album Battle Axe. This leads me to believe that Alice and Co’s, “the other guys did not want to do the theatrical stage shows” was a convenient, and easy excuse for Alice to give to the media immediately after the break up. And…as Dennis states in his book…the media, without bothering to check with the other four members, simply ran with this explanation, that hung on for decades. (Alice was still stating the “theatrics” theory as late as 2008)

Below is a quote from Alice about this topic, followed by responses from NS, MB, and DD. There is also a slightly different take from Alice, at the very end.

Cooper: ‘’I think some of the guys in the band didn’t really want to do the theatrics anymore. They knew how much it was costing us, and it was very expensive to do these big shows. They had it in their mind to pare down and do something simpler. I just couldn’t see that. The way I saw it, if we went backward we’d be dead. We needed to go forward. In my head, Welcome to My Nightmare had to be bigger than Billion Dollar Babies.’’

Mitch Lafon: Let’s talk about the break-up – Alice said he wanted to push the envelope and go even more theatrical.

Neal Smith: “That’s the biggest bunch of bullshit in the world, but go ahead…”

ML: Alice had mentioned that the band wanted to be more musical and just go do an album with no theatrics.

NS: “Just look at what happened with the band Billion Dollar Babies – we spent a fortune on a huge set. Denis was one of the flashiest bass players of the time and most of the time I was flashier than fucking Alice was. It’s an insult to say that, but Alice just had to come up with something and he’s not the spokesman for the band. There’s been so much bullshit he’s said over the years and he’s ‘my brother’, but I won’t make stories up to cover my ass. Whatever reason he had for not coming back… You see Warner Bros. was suing us. Michael and I called WB and they said ‘we don’t care who comes back as long as Alice is in the band’, but Alice didn’t want to come back with us, so he took over our contract. They wanted a band record, but we were going to take a year off and get back together, but Alice reneged on the deal. That’s what happened.”

FROM: House of Rock Interview of Mike Bruce: March 2011

MICHAEL BRUCE : We had already had a concept, an idea, and we were working on ‘Battleaxe.’ We were going to do it with Alice. Did you know that there was a stage show to go with it? We only did four gigs before it went down. What it was, it was a futuristic event that combined what I like to call “Jock Rock.” (Laughs) It was a sporting thing in a rock and roll musical environment, where competitors would sort of fight to the death, a duel in a musical arena. It’s pretty neat, I wish we could’ve pulled it off. People were really awestruck. I think it’d still be really cool now if we went back and did it. It’s funny because Alice used to say, “They got tired of theatrics, they just want to stand onstage in their jeans and play.” That really wasn’t the case.
(Emphasis added)

DENNIS DUNAWAY –  ‘’I don’t like to sound negative or regretful or blame people for things and the only reason something I say could be read like that is because it’s SO out of balance the other way.  These stories that have no basis in reality have been told about us so much and so often that it’s taken or believed to be truth when it’s SO far from the truth. One that has been told time and time again is that the original Alice Cooper Group broke up because we didn’t want to do theatrics anymore and Alice wanted to expand upon it.  How could you possibly believe that when we went and formed the Billion Dollar Babies band after Alice went solo?  We put everything we had into the Battle Axe show which was this huge production but nobody ever seems to mention that.  The mistruth that the band broke up because we didn’t want to do theatrics STILL gets mentioned (laughs).  To me personally, that’s ridiculous because I THOUGHT to do some of those theatrics.  I thought to do the makeup and the electric chair and so on so why would I suddenly not wanna do theatrics?  It doesn’t make sense so the only time I really don’t like Alice’s enhancements have been when it’s made to sound like the original band had to be let go for reasons that had anything to do with those creative elements.  That wasn’t the truth at all.  We were SHUT DOWN.’’

*A SLIGHTLY DIFFERENT ALICE VIEW OF THE BAND SPLIT:

I found this explanation for the band’s demise in the Las Vegas Gazette newspaper (July of 1975). It was part of a long interview of Alice and this is what he stated when asked about the original bands break up. Interesting because it was current with band breakup. Interesting comment, IMO. 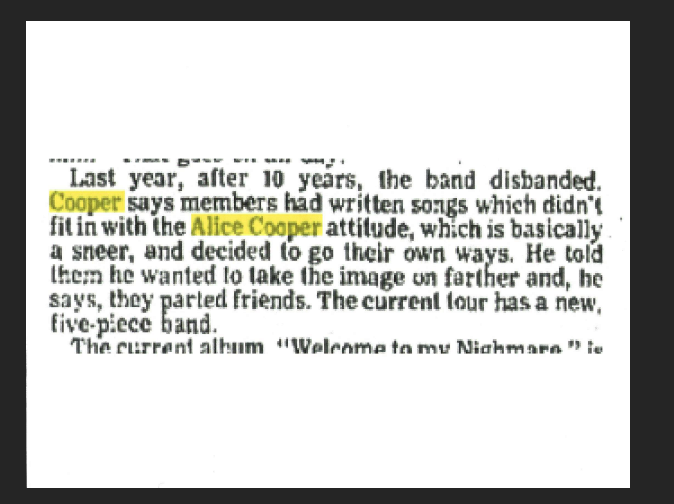 Another explanation given by Alice and his manager, Shep Gordon, not long after Vince Furnier had legally changed his name to Alice Cooper and went solo with his “Nightmare” album……

“It got very basically down to the fact that we had drawn as much as we could out of each other. After ten years, we got pretty dry together.” Manager Gordon added, “What had started in a sense as a pipe-dream became an overwhelming burden”.

Disclaimer: Except for the quoted interviews by band members, what is written above are just my thoughts and opinions. I have no first hand knowledge of events and I am sure there are many out there that know more than I do on this subject – INCLUDING the four surviving members of the original band. So…if you disagree, that is fine. Don’t blow a gasket. Read Dennis’ or Alice’s or Michael’s books (maybe Neal’s someday) and go with their views….they know best. 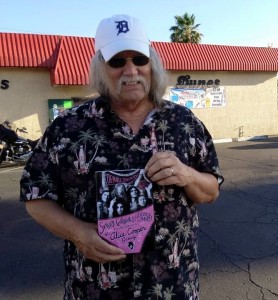 Hey….I’m just an old gray-haired guy that married into all this craziness. But don’t get too mouthy with your remarks…I think we still have one or two of Glen’s old knives laying around somewhere!!!!!