The sample chapter was about (author) Legs McNeil’s relationship with the late Norman Mailer, and the draft from which I read was the culmination of months of interviews, research, writing and exhilarating back-and-forth edits with Legs via e-mail and in person in his home office. The excerpt below is what I read at WORD, and it was enthusiastically received by the crowd. The excerpt opens at the tail end of a party in 1979 following Mailer’s first up-close experience with the punk scene, a benefit for bullet-proof vests for the NYPD. Held at CBGB’s, the show was headlined by the Ramones and also featured Shrapnel, the band Legs was managing at the time.

Norman might have indeed been drunk that night, but he really had meant for Legs to interview him, clearing time the following day to make it work.

“Norman’s office called Martha Thomases and said, ‘Where’s Legs?’” Legs remembered. “I thought, ‘I didn’t think Norman wanted to really have me interview him, I thought he was just saying that to be nice…’”

Legs got it together and made it out to Mailer’s nautically-themed Brooklyn Heights apartment the next day.

“I was really hung over,” Legs said. “And Norman wanted me to climb around in his big apartment, he had all these catwalks to get to the third floor, and you know me and heights. And I was like, ‘No, fuck that, no! I need a drink!’ And Norman got me like gin or vodka, and I was like, ‘No I need beer!’

With the drink order settled, the pair retreated to Mailer’s tiny office at the end of the hall and turned on the tape recorder.

The interview covered a lot of territory, including Mailer’s thoughts on the Ramones and Shrapnel show, his distaste for television (“I think the American disease is TV”), existential paranoia and regret. The transcript shows the pair veering wildly and perhaps politically incorrectly into murky waters like gay rights and the Battle of the Sexes.

“I was railing against gays,” Legs said. “I was young and cute and they were all hitting on me. This was a time when you’d walk down Christopher Street and there’d be hundreds of gays along the sidewalk, three or four deep, dressed in the most outrageous clothing, making catcalls and snide remarks as you passed. Basically they were sexually harassing me, ha, ha, ha!”

The Norman Mailer interview was published in the September 1979 issue of High Times.

“High Times was offering me more money,” Legs remembered, “Doing it for Punk Magazine, it just seemed like it would never come out.”

Though Roberta Bayley took the official photographs for the High Times piece, author Victor Bockris was also on hand to shoot the pair.

“When I did the photo session for them, there was clearly a real affection from Mailer to Legs,” Bockris said. “Mailer would like a guy like Legs. He loves anti-heroes. And Legs was kind of like an anti-hero. It makes a lot of sense.”

Legs soon became a fairly regular fixture in the Mailer household. According to Mary V. Dearborn’s book Mailer: A Biography, Legs made an impression on Mailer’s sons.

“Shrapnel and Legs McNeil were big hits with fourteen-year old Michael and twelve-year old Stephen Mailer,” wrote Dearborn. “When Legs told them to watch Gilligan’s Island, a show he much admired, they did, over and over. The two boys began talking like Legs and parroting his enthusiasms.”

With Legs entrenched in the inner circle, Shrapnel began playing at parties thrown by Mailer; one was covered in the Random Notes section of the April 17, 1980 issue of Rolling Stone.

“It figures that author Norman Mailer would go for Shrapnel, a New York punk band whose act is derived from endless reruns of the old Combat series,” reads the opening of the Rolling Stone blurb, written by Kurt Loder. Legs brought him to the party, along with Alice Cooper guitarist Glen Buxton, Tom Hearn, Arturo Vega, and his girlfriend, Lori K.

Shrapnel began life as Heart Attack before meeting Legs at CBGB’s. According to guitarist Daniel Rey, it took several months and countless beers before the idea of Legs managing the band was even considered. Devising a collective persona based on military games they used to play in the hinterlands of New Jersey, Heart Attack donned modified army uniforms and morphed into Shrapnel.

“We thought we needed a shtick and were really into Alice Cooper and the stage show,” Rey said. “We were sort of anti-hippie. Hippies were peace and love, and we were like, ‘Screw that! Let’s blow shit up!’ So I guess in that way we were political, though it wasn’t anything more than comic book politics.”

Those comic book politics extended to their stage show, which often featured a character called “the Gook.”

“You’ve got to remember, this was a long time ago and political correctness was not on anyone’s mind,” said Peter “Ropeburns” Russell, another Cheshire friend of Legs, who played the Gook. “It was basically an anti-communist rant which had a lot of good features to it but also had a lot of really heavy racist elements.”

“I was very interested in using all the slang terms from Viet Nam and World War II,” Legs explained, “And re-defining them. I was very influenced by Arturo Vega’s day-glo swastika paintings that were hung in the Ramones loft. I think we thought we could use all that old propaganda and imagery and give it new meaning. And, of course, rightly so, everyone thought we were racists, but we were actually a bunch of white liberals, ha, ha, ha! ”

“I would write appropriate political slogans on my chest,” Ropeburns recalled, “I remember ‘Thanks for the Canal’ because Jimmy Carter had just signed away the Panama Canal.”

“Sometimes the crowd got a hold of me and that would get ugly because I couldn’t see anything out of the damn Gook mask,” Ropeburns remembered. “If I got too close to the edge of the stage they’d seize me and pull me into the crowd. Look a lot of drugs were being taken back then and a couple of times I got beaten up pretty badly. But because of the mask thing, my head was okay.”

Shrapnel arrived early in Brooklyn Heights for the party covered by Rolling Stone, giving them their first look at Mailer’s place.

“It was wacky,” said Rey. “The apartment looked like a big ship with all these rope ladders. We had to climb up in this loft and set up our amps.”

Ropeburns remembered Mailer working on a giant Lego model of a future city. The complex cityscape had appeared on the cover of a paperback edition of Mailer’s 1966 collection of essays, Cannibals and Christians. By 1980, the utopian construction had fallen into disrepair, covered in dust and left to ruin.

“He was going to order everybody’s life with it, which was a little strange considering how his was,” Ropeburns said. “The different colors were all like different sectors. It was all very kind of ‘50s modern. He and I talked a lot about that, and we were both drinking pretty heavily.”

Among the party guests that night were Woody Allen, Shelly Winters, Kurt Vonnegut and former light heavyweight fighter José Torres. Shrapnel was unmoved by the heavy dose of celebrity.

“Woody Allen hid in the bathroom all night,” Legs remembered, “And people keep knocking on the door because they had to pee or do coke or whatever, but Woody wouldn’t open the door. Finally, he opened the door a little and peeked out, and Arturo Vega opened the bathroom door all the way and said to Woody, ‘Boy, you really are shy, aren’t you?’ Then Arturo closed the bathroom door on him, in disgust.”

The punks weren’t just unimpressed with Woody Allen’s fame, but also their host’s.

“We were pretty young, so we weren’t starstruck by this famous author,” said Rey. “He was just this cool old guy who could hold his liquor, was pretty funny and had a hot young wife. It was the kind of thing we’d mention to our parents and they’d go, ‘WHAT?!?!?’ We’d be like, ‘Yeah, but David Johansen was there too,’ and they’d say, ‘Who…?’”

Hearn remembers being far more starstruck at the time by Alice Cooper lead guitarist, Glen Buxton, than he was by Mailer.

“That to me was really cooler than Norman Mailer, you know?” Hearn said. “We rode around in Glen Buxton’s Trans Am with the t-top off, and he was flying down, whatever downtown avenue it is, going to the Mudd Club, when you get all green lights. ‘Wow, now this is fun!’”

“Norman couldn’t just stand by and watch someone wrestling in his house without getting involved,” Rey remembered. “He grabbed Legs and they went flying over and Glen Buxton went flying on the ground. Someone was bleeding, but it was all in good fun.”

Legs remembered opening up a cut on Mailer’s ear, though he believed it had recently been lanced in a doctor’s office and there was a fresh scab which came off while they grappled. Hearn recalled the fight getting a bit more serious once the blood began flowing.

“Legs was getting the worst of it because Norman was way bigger,” Hearn said. “But they’re both about equally drunk, I would say. Legs is very slippery, and at the time, well, we were in our 20’s, so he must have had 25 or 30 years on Norman. But, yeah, he was getting the worst of it. No question. And that was standard. When Legs was in a fight, Legs was losing a fight: That’s all there was to that.”

Shrapnel singer Dave Wyndorf remembered the party getting even weirder as it wound down.

“We started to mingle, and I’m getting drunk and the crowd is melting away,” Wyndorf said in a 2012 interview with Tom Scharpling of Low Times, “And finally it was just Norman – Mr. Mailer – and us– the people that would never leave.”

According to Wyndorf, Mailer decided to impart some existential cake-based wisdom on his young guests, returning from the refrigerator with a cheesecake.

Glen Buxton might have gotten off relatively easy in the wrestling match earlier, but that was about to change.

“Buxton is looking around and he sees a picture of Norris Church, Mailer’s wife,” said Wyndorf. “And he says, ‘Man, who’s what girl? She’s fucking hot! I’d like to fuck her!’ And Norman goes, ‘It’s my wife!’ and headbutts him like a goat, like a billy goat. Knocks him out.”

The Rolling Stone report mentioned Mailer giving the guys in Shrapnel the rest of the booze from the party, but Rey said it didn’t leave with them.

“We drank beer at that time, you know, so we didn’t know what to do with it all,” Rey said. “Glen Buxton took it all home.” 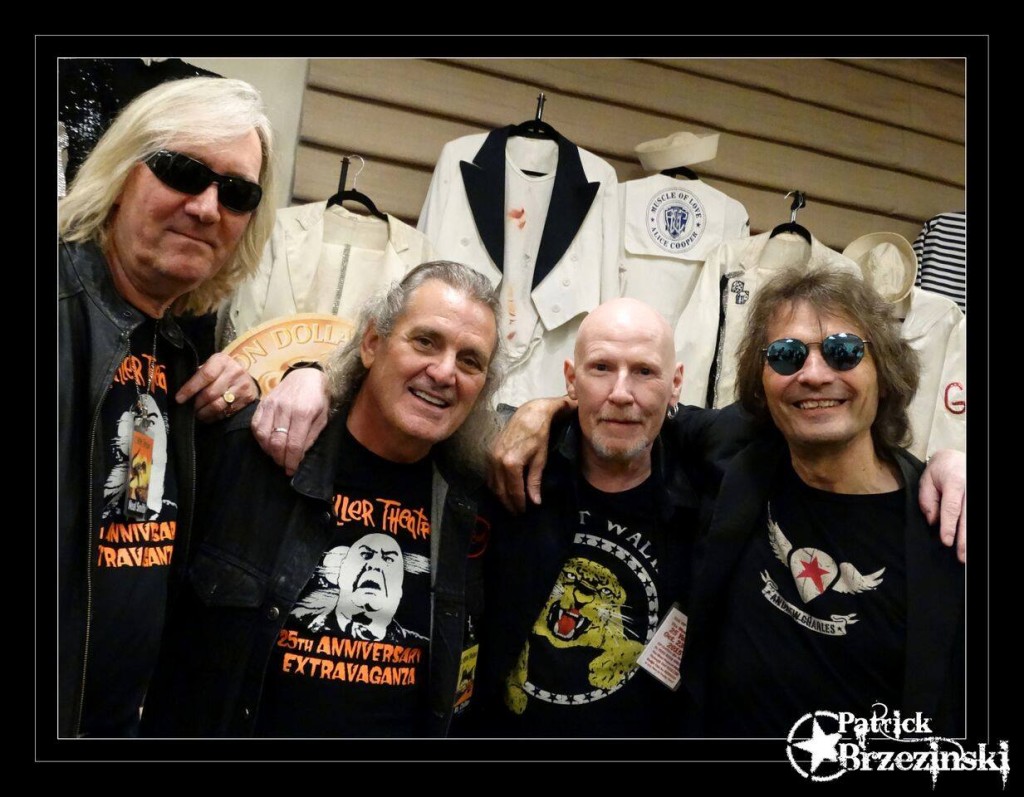 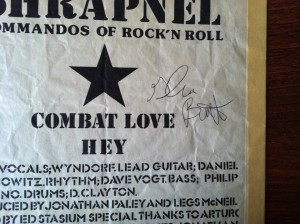 Concert poster belonging to Tom Morgan. Glen’s autograph on a poster for the band ‘Shrapnel’, who Glen knew and reported would join on stage. 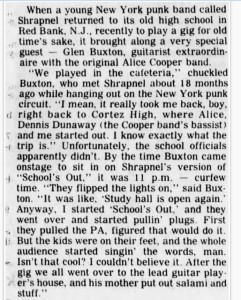 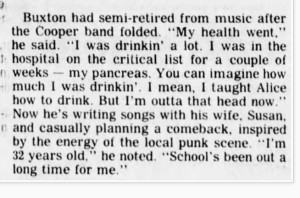 Above: Article in a column found in a Reno Nev paper by Kurt Loder. March of 1980