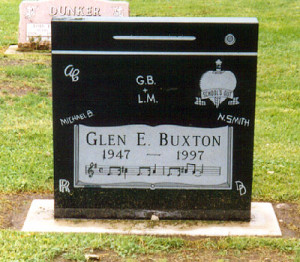 Wright County Examiner – October 23, 1997
Glen Buxton, lead guitar for Alice Cooper dies here.
Glen E. Buxton, 49, of Clarion, died Sunday, October 19, 1997 at North Iowa Mercy Medical Center in Mason City. Buxton was well known in rock music circles as lead guitar for Alice Cooper. Buxton was born November 10, 1947 at Akron, Ohio, the son of Thomas J. and Geraldine E. Carlson Buxton. At the age of 14, the family moved to Phoenix, Arizona where he graduated from high school and attended college.
He began his music career in 1964 with a group formed as “Earwigs”. Later they changed their name to “The Nazz” and in the late 60’s to “Alice Cooper” The group broke up in 1974 and Buxton formed a group in Phoenix called “Virgin”. He was lead guitarist with all the groups.
In 1990, Buxton moved to Iowa to help his friend, John Stevenson, farm. He was later with Buxton-Flynn in Minnesota.
Those left to cherish his memory include his fiance, Lorrie J. Miller of Clarion; Parents, Thomas and Geraldine Buxton of Glendale Arizona; one brother, Kenneth of Glendale, Arizona; one sister, Janice Davison and her husband, Bob, of Bullhead City, Arizona; two step-sons, Robert and Michael Busick of Dearborn, Michigan. Services will be held Friday, October 24, at 10 a.m. at Willim Funeral Home in Clarian. Rev. Gary Boen of First Lutheran Church, Clarion, will officiate. Burial will be in Evergreen Cemetery, Clarion. Willim Funeral Home is in charge of arrangements.

Greg Prato (AllMusic) on Glen’s passing:
A founding member of the Alice Cooper band, guitarist Glen Buxton was the writer of several of hard rock/heavy metal’s most instantly identifiable guitar riffs. Born in Akron, OH, on November 11, 1947, Buxton grew up in Arizona, befriending high school tracksters Vincent Furnier and Dennis Dunaway, who invited Buxton to join up in a spoof band (the Earwigs) they put together for a school show. After receiving a favorable reception, the group changed its name to the Spiders, before relocating to California (with second guitarist Michael Bruce and eventually, drummer Neal Smith). First playing shows as the Nazz, the quintet changed its name to Alice Cooper, with Furnier eventually taking the band’s name as his own. The newly christened group specialized in a highly theatrical and macabre stage show, which took awhile to catch on with rock’s audience.
Although they befriended other bands in California (namely, early supporter Jim Morrison) and issued a pair of psychedelic albums that were musically comparable to early Pink Floyd, neither 1969’s Pretties for You and 1970’s Easy Action faired well. After a move to Detroit, the Alice Cooper group toughened up its sound on breakthrough albums from 1971 (Love It to Death and Killer) as Buxton’s metallic guitar riffs helped fuel such rough and ready compositions as “I’m Eighteen,” “Is It My Body,” “Be My Lover,” and “Under My Wheels.”
But Buxton’s finest moment with Cooper was yet to come — arriving on 1972’s School’s Out. The album was a massive hit, as its classic anthemic title track featured one of hard rock’s best all-time riffs, courtesy of Buxton. Just as the group was hitting its stride, a lifelong alcohol dependency began to affect Buxton’s performance, which hindered his input on arguably Alice Cooper’s finest hour, 1973’s Billion Dollar Babies (it’s been speculated that Buxton’s guitar wasn’t even audible on the ensuing tour, as his parts were supplemented by touring guitarist Mick Mashbir). Despite the Alice Cooper band’s standing as one of the world’s most popular rock bands, the quintet split after only one more release, Muscle of Love.
Little was heard musically from Buxton after the group’s split, aside from appearing at an all-star 1978 benefit for Dead Boys drummer Bobby Blitz at New York’s CBGB’s. In the mid-’80s, Buxton lent some guitar work to Blue Öyster Cult guitarist/singer Buck Dharma’s 1982 solo album, Flat Out, and formed the original group Virgin (unfortunately, the only existing recording of the band is the 1985 bootleg Live at the Mason Jar). In 1997, Buxton was reunited with his former Alice Cooper bandmates (sans Cooper himself), on Antbee’s Lunar Music, and on October 10 of the same year, reunited on-stage with Smith and Bruce for the first time since Cooper’s breakup at the Area 51 club in Houston, TX. While longtime fans speculated that all this activity would eventually lead to a full-on original Alice Cooper band reunion, all hopes were extinguished barely a week later on October 18, when Buxton, 49, died in an Iowa hospital due to complications brought on by pneumonia. Buxton’s gravestone features an adaptation of the album artwork for Cooper’s School’s Out album, as well as a musical transcription of his world famous guitar riff for the album’s aforementioned title track. 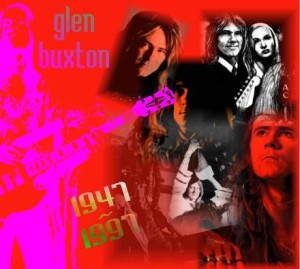 Glen Buxton played a crucial role in rock history but how many people knew about it?

It was a Friday night and Glen Buxton was jumping up and down with excitement as watched boxing on TV. The only indication that anything was wrong was a pain in his side, which he mentioned to his younger sister Janice Davison over the phone that night He thought he’d strained his back, carrying luggage on a recent trip to Houston “He said, ‘I’m going to have to see the bone crusher tomorrow; my back’s hurting me,'” Davison recalls.

By the next day, Saturday, October 18, the 49-year old guitarist had been overtaken by pneumonia, and he died quickly in his adopted hometown of Clarion, Iowa.

There are many sad elements to the Glen Buxton story, but maybe the biggest one is that many people in the valley have never heard of him. Though he grew up in Phoenix, attended Cortez High School and. played guitar for the most successful rock band ever to come out of these parts, he’s a victim of rock’s strangest injustice.

You see, Buxton played in the original Alice Cooper group, when Alice Cooper was the name of a band, and its singer still went by his given name of Vince Furnier. When the band agreed that Furnier should himself assume the name of Alice Cooper, as a way of answering that persistent audience question, “Where’s Alice?,” confusion reigned forever in the minds of rock fan’s.

It’s hard to think of a comparable situation, unless you count the case of dimwitted fans who actually started referring to Deborah Harry as “Blondie.” when Lou Reed’s career is assessed, fans can point to clear demarcation lines. He played with the Velvet Under-ground from 1965-70, and he’s been a solo artist from 1971 to the present. Yet, because Furnier/Cooper co-opted his band’s name, so dominated its public image, many of his fans believe he’s been a solo artist for 29 years, albeit with a variety of backing bands. Few realize that he was a member of a full-fledged band for six years and a solo artist for the next 23. Not so coincidentally, Furnier/Cooper lost much of his rock ‘n’ roll grit when he sacked the band in 1974.

Buxton met Furnier and bassist Dennis Dunaway when they worked together at the Cortex High School newspaper, the Tipsheet. Buxton was the photographer, Furnier was the editor. They went on to form the Spiders, one of the wildest rock bands the Valley had ever seen, and after a brief period as the Nazz, they settled on Alice Cooper as a band name.

Buxton wasn’t a full-blown songwriter in the sense that guitarist Michael Buxton and Furnier were, but he came up with the killer guitar rifts that heralded the arrival of their great anthems: “I’m Eighteen,” “School’s Out” and “Elected.” His wicked guitar part for “I’m Eighteen” alone makes him Hall of Fame material.

In his controversial band biography, No More Mr. Nice Guy which Furnier/Cooper has dismissed as a work of fiction-Bruce blames Buxton’s deepening drinking problems and sense of detachment for Coopers decision to go solo. Sadly, alcohol continued to play havoc with Buxton’s life until the end.

“He would quit for a while and then he’d start up again, or he’d say, “I’ll just drink beer,”‘ Davison says. “But he wasn’t supposed to drink after he’d had problems way back in the 70’s.”

Buxton tried putting other bands together, like a short-lived New York outfit called Shrapnel. Davison says that to the very end, “he always had a guitar in his hands.” In the mid 80’s he returned to Phoenix and played in a band called Virgin. Though his return to the stage was welcomed, old fans winced a bit to see one of rock’s great underrated guitarists covering Yes’ “Owner of a Lonely Heart” and various old Alice Cooper Hits.

But what does a great guitarist do after playing to exultant stadium crowds by the age of 22, then seeing his lifeblood taken away by the time he’s 27? Just being a guitarist in a bar band, which was what he’d started doing, didn’t seem adequate any-more. But unlike his ex-bandmates, Buxton had a tough time just making a living after the band broke up.

“1 just found out what happened with the money,” Davison says; “when they were Alice Cooper, Inc., they had an account, and when the corporation broke up, they gave the money to the guys. And you have to pay taxes on it. And what did Glen do? He spent it of course. So he had tax problems after that. He was living in Connecticut at the time and had to sell his house.”

To get by, Buxton worked sporadically at a variety of jobs, including a stint at Goodyear in the 80’s, where his ax was a soldering gun. After moving to Iowa, he worked for a spell in a factory, overseeing a machine that stuffed Publisher’s Clearing-house letters in envelopes.

Ironically, Buxton’s life had taken a positive turn in the past two months. In August he caught a Furnier/Cooper show in St Paul, Minnesota, and the two old friends spent an hour talking up the old times. In early October, he reunited with old Alice Cooper bandmates Michael Bruce and drummer Neal Smith for a series of autograph shows and live performances in Houston. Davison says her brother “had a ball” reuniting with his old friends, adding that he showed his forgiving nature by playing again with Bruce, despite Bruce’s unflattering portrait of Buxton in No More Mr. Nice Guy.

What’s most important now is that Cooper fans recognize Buxton for the crucial role he played in one of the few great bands of rock’s most depressing era, the early ’70s.

His old Cortez High School comrade Vince Furnier, known to the world as Alice Cooper, has done his part to set the record straight. In a statement released last week, Cooper said the following: “I grew up with Glen, started the band with him and he was one of my best friends. I think I laughed more with him than anyone else. He was an underrated and influential guitarist, a genuine rock ‘n’ roll rebel. Wherever he is now, I’m sure that there’s a guitar, a cigarette and a switchblade nearby.” 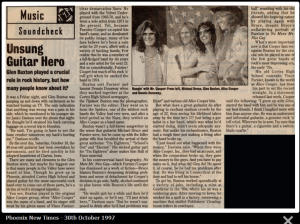 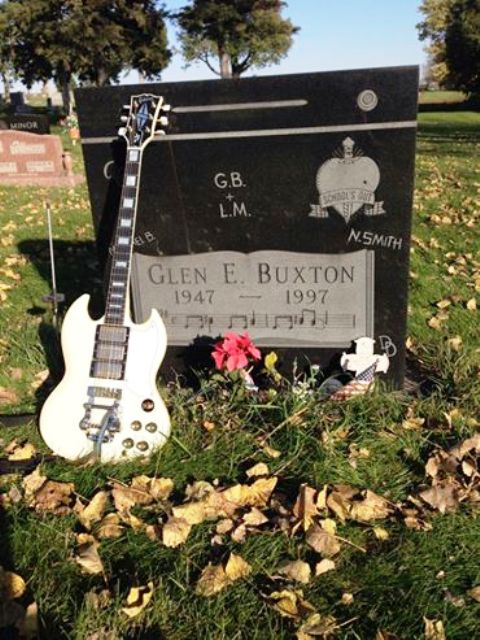