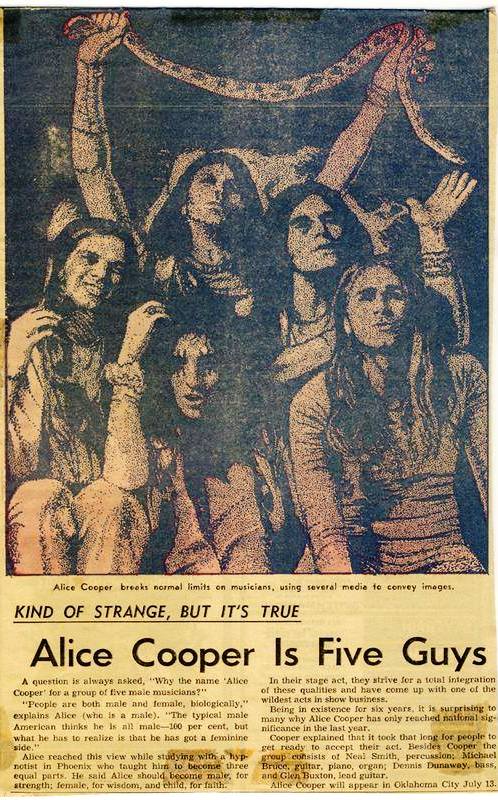 1. After the South American tour in the spring of 1974, the band plans a year off, during which time, MB will make a solo album. NS will also start work on an album, working with Dennis.
2. Alice, Dennis, Neal, and Glen agree (verbally) to get together, after a year, and make the next Alice Cooper (band) album.
3. Unknown to the other four, Alice has legally changed his name and is working on a solo album of his own. Alice is working with Dick Wagner during the summer and is recording with Bob Ezrin by August of ’74. It is likely that this album was planned before the last tour began.
4. Management threatens MB, warning him not to make his album…. using the threat that Alice will do the same and perhaps not return. [Question of the time of this ‘warning’ – was it before, during, or after the S. American tour?]
5. WTMN is a success, so Alice has no need to reunite with the other members. (However, going back on his promise to do so.)
6. In 1977, having given up hope of a reunion of the band, Michael, Neal and Dennis form the Billion Dollar Babies band, but due to lack of management support and cash, the band records only one album, and perform only a few shows. The band was also plagued by threatened lawsuits from their former manager, Shep Gordon, over the band’s name.  Sadly, it is unlikely that Glen would have been a full participant, if the band had stayed together past 1974.

While the troopers known as the Coopers split for the distant shores of the world, the celebration of a decade of hard work was being prepared for their fans.
Up in the Hollywood Hills, where show business mansions pepper the steep slopes like million dollar mushrooms, a long-haired, familiar looking construction worker was busy tearing apart and rebuilding a house. Far across the country, on a flat, luxurious backroad of Connecticut, another long-haired, familiar seeming figure was fascinated by a video tape system, spending hours taking apart the tiny transistorized mechanism and repairing it just for fun. A few miles away, a shy young man with braces on his teeth with alternately lying in the healthy sun of hiding in an expensive darkroom, indulging himself gloriously in his latest hobby – photography. Meanwhile, on Lake Tahoe, in a studio built into a private home, another familiar looking longhair figure was busy composing and recording bits and pieces of music.
The group? An unlikely description of the Alice Cooper Band, but that’s what America’s ghoulish vaudevillians have been up to for the last four months – enjoying themselves with the wealth accumulated through ten years of hard work. As a kind of glorious celebration of this decade of recording, touring, and going through the rock and roll mill, Alice Cooper is presenting his Greatest Hits, on Warner Brothers Records.
The group’s first respite from hard work began when they found themselves in Brazil, after the first major rock and roll tour to hit that country. It was decided around that time that everybody needed a few months to themselves; they had just finished a feature length film, and the Brazilian tour, though fun, had reminded the Coopers what life on the road was like. Anyway, some of the members of the band had a few surprises in store.
Stranded in the jungle: Glen Buxton, with his remarkable putty nose, winning grin, and jewellery dripping from every finger, disappeared into the Brazilian jungle with a leggy brunette on his arm – Buxton’s constant companion, Susan. Although everyone in the Coopers had taken off for their own vacation spots, the main office of Alice Cooper productions, Alive, tried to keep tabs on the whereabouts of their superstars. When Glen didn’t emerge for two weeks after entering the Brazilian jungle, a few people involved with the Coops began wondering where he was. After a month had passed, everybody started to get worried, until publicist Ashley Pandel came up with a few soothing words: “Glen’s a snake expert. He’s probably right at home in the jungle.” Sure enough, after nearly six weeks hidden in the underbrush, Glen returned to New York, and settled into his Connecticut estate to watch TV, enjoy the summer, and tinker with his video equipment.
Dennis, not far away in Connecticut, spent his time with his girlfriend [wife], Neal Smith’s sister Cindy, splashing in a pool, going on nature hikes and taking pictures in-between retakes on the Cooper movie, “Good To See You Again, Alice Cooper.” A gentle, quiet person, Dennis emotionally watches over his zoo of pet snakes, mice, rabbits, dogs and cats while waiting for vacation to pass.

Mike Bruce, after Brazil, was immediately the most industrious. When he arrived in New York, he sold his Connecticut house and moved to the place he always wanted to settle – a magnificent home on the edge of Lake Tahoe, where he could water ski, fish, and most importantly, build his own studio in his house. The studio for Mike is not just a practice area. Along with former Cooper back-up guitarist Mick Mashbir, Mike is busily at work preparing what looks like the first solo album to come out of the Cooper group. It was Mike, after all, who wrote most of the original smash hit melodies that made Alice Cooper famous. His solo opus should be a magical treat from the master of fascinating music.
Neal remains in his own home in Connecticut, putting the finishing touches on a surprise album he’s been working on secretly for awhile. Tentatively titled The Platinum God, Neal’s album is not only an amazing exercise in drum expertise, but points out Neal as a first rate songwriter on his own. The work on Neal’s solo album is only interrupted by trips to the garage to keep his Roll Royce in perfect condition, much like a fine timepiece.
The best star on the horizon at the moment is Alice’s own solo album. Now in the planning stages, the album promises a superstar lineup of songwriters and composers. Heading the list are The Beatles and Harry Nilsson. If things work out well, it’s possible that Marvin Hamlisch, the winner of the Academy Award for the soundtrack to the motion picture “The Sting,” will do the arranging for Alice’s solo journey. There are even more surprises in store for that album, and whispers can be heard that there’s room for Groucho Marx (one of Alice’s biggest fans) along with George Burns on the LP.

Wikipedia on the Break-up

Wikipedia is…Wikipedia. They are NOT the final say on any subject, nor do I list their remarks here as being superior to anyone’s views on the subject. Just one more view of this event.

‘Beneath the surface, however, the repetitive schedule of recording and touring had begun to take its toll on the band, and Cooper, who was under the constant pressure of getting into character for that night’s show, was consistently sighted nursing a can of beer.

By 1974, the Muscle of Love album still had not matched the top-charting success of its predecessor, and the band began to have constant disagreements. For various reasons, the members agreed to take what was expected to be a temporary hiatus. “Everyone decided they needed a rest from one another”, said manager Shep Gordon at the time. “A lot of pressure had built up, but it’s nothing that can’t be dealt with. Everybody still gets together and talks.” Journalist Bob Greene spent several weeks on the road with the band during the Muscle of Love Christmas Tour in 1973. His book Billion Dollar Baby, released in November 1974, painted a less-than-flattering picture of the band, showing a group in total disharmony.

During this time, Cooper relocated back to Los Angeles and started appearing regularly on television shows such as The Hollywood Squares, and Warner Bros. released the Alice Cooper’s Greatest Hits compilation album. It featured classic-style artwork and reached the US Top 10, performing better than Muscle of Love. However, the band’s 1974 feature film Good to See You Again, Alice Cooper (consisting mainly of 1973 concert footage with ‘comedic’ sketches woven throughout to a faint storyline), released on a minor cinematic run mostly to drive-in theaters, saw little box-office success.  The final shows by Alice Cooper as a group were in Brazil in March and April 1974, including the record indoor attendance estimated as high as 158,000 fans in São Paulo on March 30, at the Anhembi Exposition Hall at the start of the first ever South American rock tour.

In 1975, Alice Cooper returned as a solo artist with the release of Welcome to My Nightmare. To avoid legal complications over ownership of the group name, “Alice Cooper” had by then become the singer’s new legal name. Speaking on the subject of Alice Cooper continuing as a solo project as opposed to the band it once was, Cooper stated in 1975, “It got very basically down to the fact that we had drawn as much as we could out of each other. After ten years, we got pretty dry together.” Manager Gordon added, “What had started in a sense as a pipe-dream became an overwhelming burden”. The success of Welcome to My Nightmare marked the final break-up of the original members of the band, with Cooper collaborating with their producer Bob Ezrin, who recruited Lou Reed’s backing band…

A photo with a lot of symbolism – at least for me – of the coming of the end of the Alice Cooper band. Is Neal tipping his hat in a sort of “so long” gesture? Dennis’ holding of a dismembered mannequin, a symbol of a dismembered band? A hand in Glen’s pants, a scream for help? The abandoned guitar? Michael – trying to hold it together? And, of course, Alice ready to lay an axe to the entire thing? But just, basically, Alice in front and the other four members of “Alice Cooper” just out-of-focus people in the background.