Grande Ballroom? or Grande Riviera?
A few years ago, Alice appeared on a documentary film about Detroit’s famous Grande Ballroom, called “Louder Than Love”. His appearance was based on the assumption that the band played in the Grande Ballroom at some point (probably 1969). However, I have found no evidence on the net, or elsewhere, that the band played the ORIGINAL Grande Ballroom. According to Si’s Halley’s Sickthings timelines, the band appeared at the Grande on October 10 and 11, and again on November 1 of 1969. The October-November dates bring up a problem. Per my research, Russ Gibb, who put on the Grande shows, stopped scheduling concerts at the original Grande at the end of August (lease issues?) and for three or four months rented out the Riviera Theater (about a half mile down Grand River Ave from the ballroom) to put on rock shows. The theater’s name was actually changed to the ‘Grande Riviera’ during that time period. I have found a concert database website that states that the Alice Cooper Band played THERE on October 10 and 11….the second night opening for the Who. I’ve talked to two people who state that they were at the concert where the AC band opened for the Who. According to a handbill the AC band was suppose to play both Friday and Saturday nights (the 10th and 11th)….but the Friday performance has not been verified. There is no information I can find about the November 1st performance. It remains a possibility however. The Grande was still available to lease, and it is possible bands played/practiced there….at least for a short time. 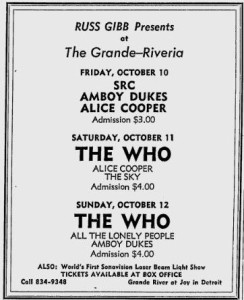 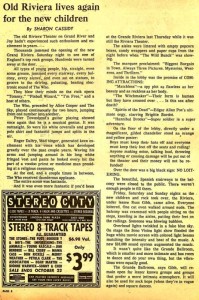 The plot further thickens with the creation (?) of the B.B. King/AC legend. This story has the premise that there was a mix up over who would take the stage last at the Grande, when these two acts were accidentally booked the same night. B.B. King did play the original Grande…but as far as I can determine – there was no bill (at ‘either’ Grande) where he and the AC Band were performing. Russ Gibb has continued to perpetuate this story, even recently. The story even has had different renditions coming from Alice, B.B., and Russ Gibb on how the problem was resolved! It is possible that, since Russ put on shows at other venues, he is thinking of a different venue and show.
It seems then, that the band played one or two nights in October of 1969 at the Grande Riviera Theater just down the street from the ballroom. A beautiful theater* – but not the iconic Grande. My final bit of evidence comes from an individual who asked Alice about playing at the Grande….and Alice mentions seeing movies there as a kid. Obviously he is not referring to the Grande Ballroom which was built for dancing and live music and was later used a roller-skating rink.

Thus, Alice’s participation in the documentary film “Louder than Love” in which, he claims to have played there, has to now be dubious. (One of his quotes: “The rest of the world was on 10 – the Grande was on 11.”) He seems, either, to have formed a recollection out of ‘the vapors’….or… he confused the theater with the ballroom…a simple mistake made decades later. And the B.B. King story???? Who knows who created that bit of myth?
Added: A poster commemorating the Grande Ballroom was created about the time that the documentary, “Louder than Love” was released that lists many of the famous (some very famous, some not so much) bands and entertainers who played the Grande from 1967 to 1970. Alice Cooper is not listed on the poster.

*During the twenties, the Riviera Theater was considered the finest theater in Detroit. Looking at old pictures of the Riviera, it is easy to tell that it was a beautifully designed theater on the inside. If you are inclined, these websites give more information, and photos of the Grande-Riviera Theater. 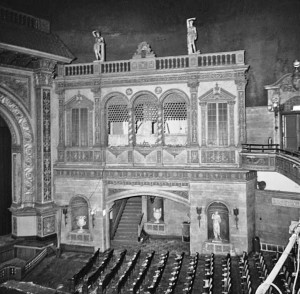 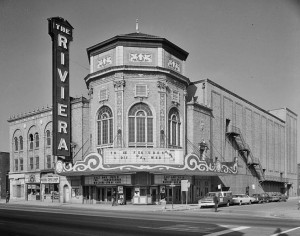 The Riviera Theater, or Grand Riviera Theatre, as it was first called when it was opened on August 24, 1925,  was the only Detroit-area theater designed by John Eberson. It was built in an Atmospheric/Italian Renaissance style, and resembled a palazzo, complete with a spectacular auditorium decorated to look like an outdoor courtyard.
Its soaring grand lobby was equally stunning, complete with a grand marble staircase and not one but three great arched windows over front doors. A four-story vertical marquee spelled out the theater’s name boldly over Grand River Avenue.
The theater opened with the film ‘Desert Flower’. Within a couple years, it was wired for sound. In the early-1930’s, the ‘Grand’ was removed from its name-though it was no reflection on the beautiful theater itself-and was from then on known as the Riviera Theatre.
In 1957, stage shows replaced movies at the Riviera Theatre, but returned in 1962. Seven years later, the Riviera Theatre closed. From 1969 until 1974, the Riviera Theatre was used for rock concerts, but from then on, was closed, awaiting its next incarnation, which never came. It quickly began to fall into disrepair, and by the 1990’s, was a sad sight.
Unfortunately, one of Detroit’s most unique movie palaces was demolished in 1996. Since August 2001, the site has been occupied by the Detroit Grand River Social Security Office.
It was designated a Michigan State Historic Site in 1980, and listed on the National Register of Historic Places in 1982, but was subsequently demolished in June, 1996. Wikipedia 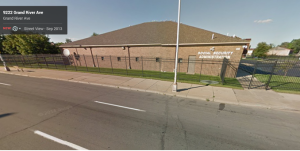 The former site is home for a social security Office

Alice Cooper and the Grande-Riviera Theater.

Photo #1 – Alice and Glen, on stage with, what appears to be, a chicken. (chicken real?) The stage and background suggest that this was taken at the Grande-Riviera.  The same night as The Who performed… Saturday Oct 11, 1969. That is about a month AFTER the Toronto Chicken Show.

Photo #3 – A different shot. Same night. Alice on the left.

Photo #4 – Photo of Pete Townshend at the Grande Riviera. Taken by Josh Emmett on OCTOBER 12, 1969. (AC did not play that night – Sunday). Photo by Josh Emmett.

Photo #5 – Speakers/amps are the same (notice white object on top of far right one. But, most of all, notice the feathers at the edge of the stage…left over from Alice Cooper’s opening set. Photo from Saturday Oct 11 by Frank Pettit.

Photo #6 – Alice and ‘the door’ singing “Nobody Likes Me”. Photo by Frank Pettit. 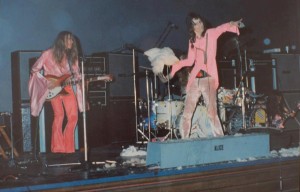 #1 Not sure if chicken is real here. Was NOT thrown into crowd. 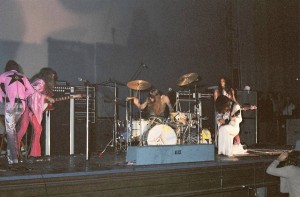 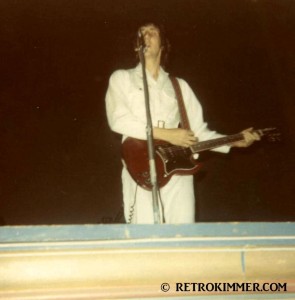 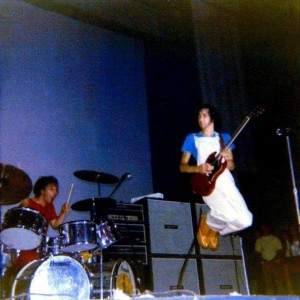 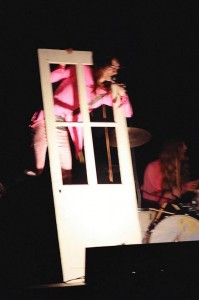 There is a facebook page – ‘Louder than Love’ –  dedicated to the Grande film documentary, of the same name, that was put out a few years ago, which included audio visual commentary by Alice. Through that FB page, I asked the film’s producer (Tony D’Annunzio) what he knew about Alice and the bands connection to the original Grande Ballroom. I told him I had yet to find any evidence that the band played there in the late 60’s. I wondered if Alice’s inclusion in the film was more PR than fact. Mr. D’Annunzio dismissed me as some crackpot, claiming that “1000s of people” – both patrons and fellow performers had witnessed the bands performance. Of course I asked for any evidence (dates, photos, etc) and got nothing but a few other posters saying they were ”pretty sure” they remembered them there. After a few days my post was deleted. It seems, these days,  film historians don’t want to discuss facts in their documentaries.

Riviera Theater in 1957. View from stage. A lot of the glamour from the 20s and 30s had been removed by this time. 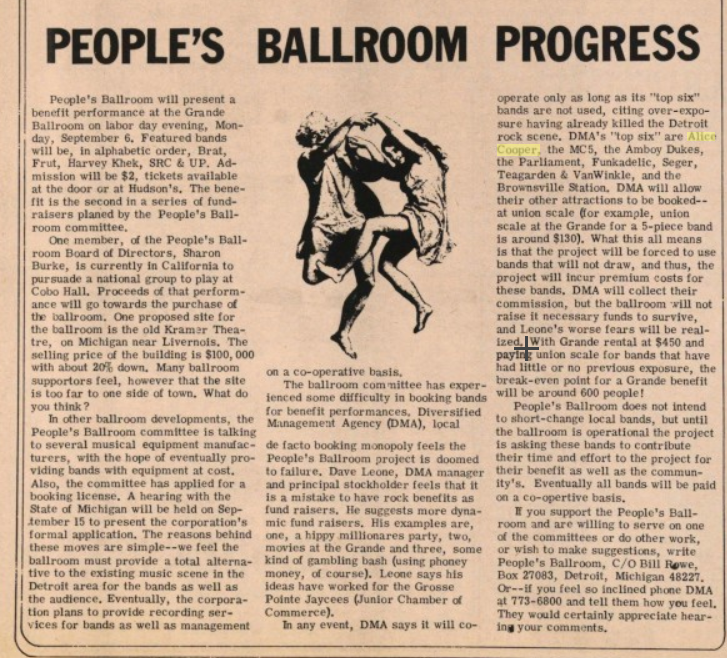